In order to write logs to the Windows Event Log, Sysmon installs an event instrumentation manifest. This manifest describes each type of Sysmon event, including its name and the fields that it contains.

An extract of Sysmon’s instrumentation manifest

This manifest is automatically installed when Sysmon is installed, but it can also be installed by passing the -m flag to the Sysmon binary:

To install the manifest, Sysmon calls the wevtutil.exe executable twice. Firstly, it uninstalls any existing Sysmon manifest using the um flag. Then, it performs a clean install of the manifest by using the im flag:

N.B. Although two temporary manifest files are created, the contents of both files is identical.

So, if Sysmon installs this manifest as part of its setup process, what happens to its event logging capabilities if we uninstall it? 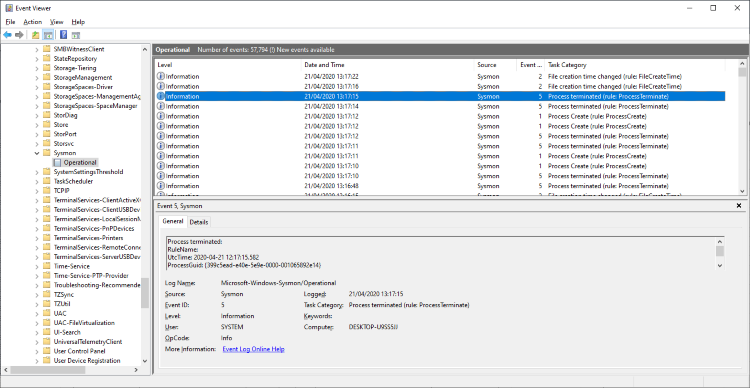 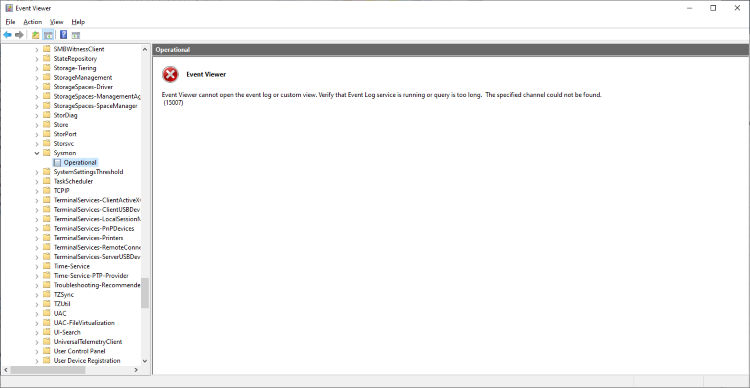 I have written a PowerShell script which automates this uninstallation process, which is available here. Note that uninstalling a manifest only requires a small subset of the entire manifest.

As you can see, the Sysmon channel has been removed. If we open the Sysmon event log file (Located at C:\Windows\System32\winevt\Logs\Microsoft-Windows-Sysmon%4Operational.evtx), we can see that the last event that Sysmon wrote was the execution of wevtutil.exe by our PowerShell script. No further system activity is recorded. Sysmon does not manage to write an error event to the Sysmon log. 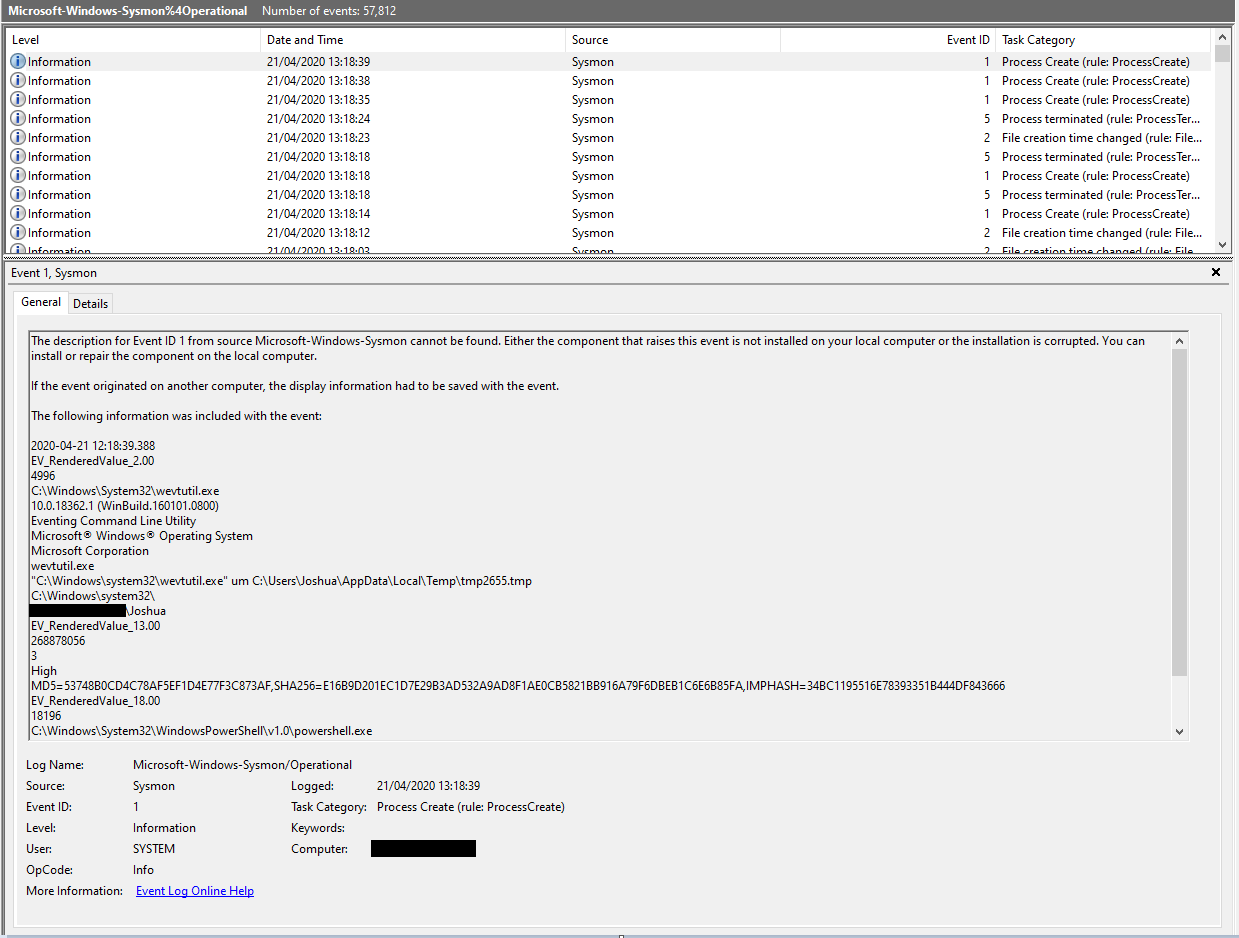 Depending on how the Sysmon events are shipped off to a SIEM, uninstalling the event manifest may prevent the PowerShell execution event from making it to the SIEM. For instance, a client configured to send logs via the Windows Event Forwarding framework won’t be able to find the Microsoft-Windows-Sysmon/Operational channel, and so the event won’t be forwarded.

As far as I can tell, the event manifest uninstallation is not recorded under any other event channel either.

It is possible to detect the use of PowerShell to launch wevtutil, which should be considered a suspicious activity. 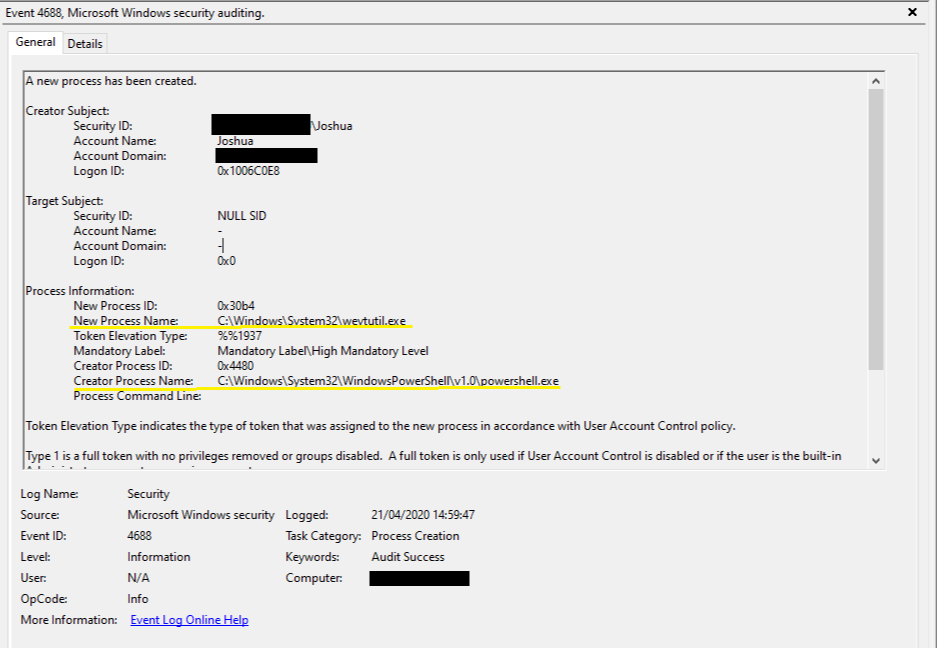 This Sigma rule looks for the same activity:

Although not fool proof, if you are ingesting PowerShell logs into your SIEM, you could look for PowerShell 4104 events which contain the GUID of the Sysmon event log provider: 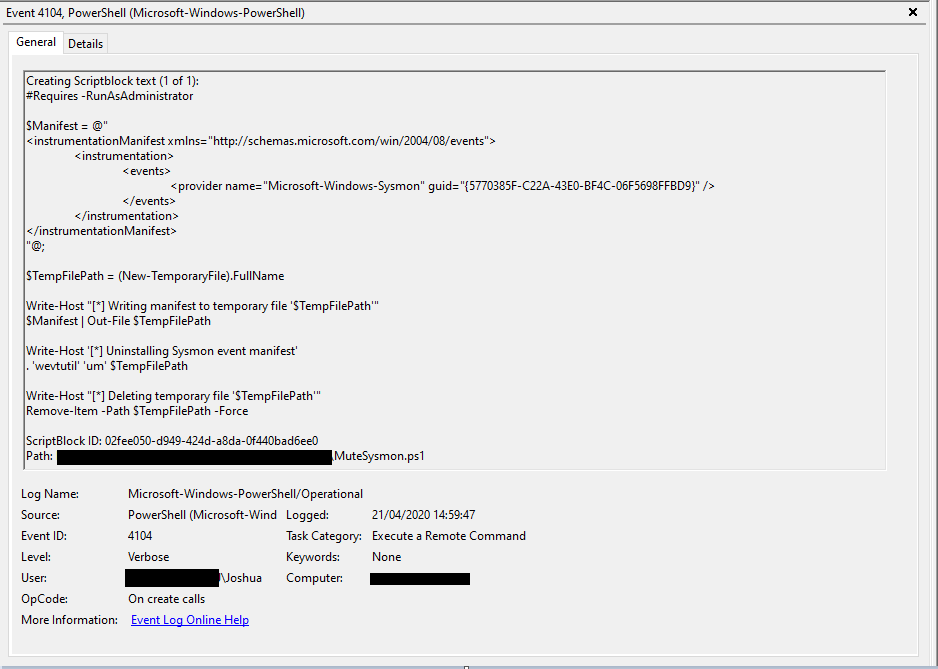 When uninstalling a manifest using wevtutil.exe, it first attempts to open the corresponding registry key, in this case located at HKEY_LOCAL_MACHINE\SOFTWARE\Microsoft\Windows\CurrentVersion\WINEVT\Publishers\{5770385f-c22a-43e0-bf4c-06f5698ffbd9}. It first requests read access, before requesting full access rights against the registry key.

Once it has that access, it performs the uninstallation routine, which involves deleting a few different registry keys.

However, if we prevent wevtutil.exe from acquiring full access rights, the uninstallation quietly aborts, and thus Sysmon continues to function as expected.

I have provided an example PowerShell script, available here, which applies a restricted ACL that prevents the Sysmon event manifest from being uninstalled. It takes a parameter -IdentityReference which should be the account used to install Sysmon. This account will be given the full access permissions required to manage Sysmon. The script should be ran after every install / upgrade of Sysmon.

In this blog post, I’ve explained the purpose of the Sysmon’s instrumentation manifest and demonstrated how uninstalling it renders Sysmon unable to log events. I have also covered how this behaviour could potentially be detected and prevented, and provided resources to help with this.